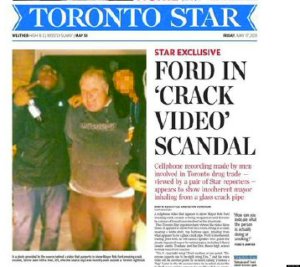 Any teacher worth their salt knows that teachable moments should never be passed up. If you are presented with the perfect opportunity to teach something important, grab it and run with it.

Toronto Mayor Rob Ford has offered up a number of teachable moments over the past few months and being the responsible teacher I am, I can’t let these pass by without comment.

Rob Ford, the infamous Mayor of Toronto (in case you’ve been living in a cave for the past few months) finally admitted to having smoked crack cocaine in the past year. He explained this ‘indiscretion’ away by saying he did it during one of his drunken stupors. Now he’s the talk of the town, the man of the hour, the Infamous Infidel.

As a comedian-in-waiting, I have been laughing along with the rest of the country at Rob Ford’s antics. The guy is comic gold! He’s Chris Farley and John Belushi (both dead from drug overdoses, BTW) all rolled into one. However, as a decent human being, my heart goes out to someone who is so obviously hurting.

In the words of the great Hanz and Franz, please, Mr. Mayor – hear me now, believe me later:

You, sir, are a human train wreck, a hot mess, a complete and absolute SNAFU.

I get it. I understand that sometimes it’s hard to put down the wine. I get it. Been there, done that. Luckily for me, none of my friends has felt the urge to videotape my antics and sell the footage to a national news outlet. (Note to friends: If you DO have videotape, please see me first. I have a suitcase full of cash with your name on it.)

But back to you, Rob.

Dr. Phil says, “Don’t tell somebody something they already know” but it doesn’t seem that you DO know. I’m no doctor, but it’s pretty obvious that you have health problems. Addiction issues, for sure. And one look at your sweaty, beet-red face and your Bad Santa profile and it’s obvious that your heart is working overtime. As a human being, I beg of you –stop. Take care of yourself. I don’t want your death on my conscience.

OK. I understand. You’re not ready to hear what I (or your friends or your colleagues on city council or the majority of the sane world, for that matter) have to say.

So, as the saying goes, If you can’t be a good example, at least be a dire warning.

Jon Stewart said it best on his show on Nov 6 when he delivered a message to the people of Toronto, ““I heard that your Mayor Ford’s approval ratings went up after it came out that he smoked crack. You know what that makes you as a city, Toronto? Enablers, eh? Now let me ask you a question, ‘Are you waiting for this man to hit rock bottom?’ . . . Mayor Ford’s a lot of fun to ridicule, but my guess is not a lot of fun to eulogize and that’s where this thing’s headed. And even though I will lose precious material, please go to rehab.”

So, kids? To summarize?

Getting so drunk and messed up that you ask the POLICE to release a video they say shows you smoking crack so that you can see how MESSED UP YOU REALLY WERE???

Your life depends on it.

Most up-to-date information on the Mayor Ford debacle (as of Nov 8).