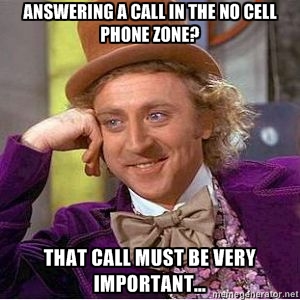 National Review theatre critic, Kevin Williamson, got himself in a kettle of controversy last week when he lost his mind and grabbed a fellow theatre-goers cell phone and chucked it across the room.

This action earned him a slap across the face and a uniformed escort from the theatre.

Turns out he was trying to watch the play he was hired to review and despite numerous requests from both management and himself, the woman next him would not stop talking loudly and using her cell phone throughout the performance.

His actions have spawned a range of reactions but to Kevin I say:

There but for the grace of God go I…

I was at the movies a few months back and the woman next me was on her cell phone throughout the entire movie. The light from her phone was in my eyes and she kept chuckling when she texted back whoever was texting her. I wanted to grab her phone and type: “Just paid $20 to miss the whole movie by texting. lol.” Unless she was saving lives through her job at the UN or finding a cure for cancer on her phone, there was no excuse. I almost pulled a “kevin williamson” that night.

I’m not a Neanderthal – I like technology. I like having a cell phone in case of emergencies and I enjoy blogging and updating my Facebook status, which my children say makes me slightly more evolved than a T-Rex. 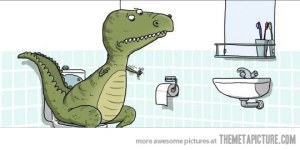 Sometimes I feel like a throwback to another era. Not as far back as the pioneers or anything gross like that (nooo…I like running water…and antibiotics) but at least to an age where people ignored the world around them politely by daydreaming or impatiently waiting for their turn to talk.

Don’t get me wrong. I can be just as rude as the next person when I’m having a conversation. I am particularly known for desperately wanting to tell my related story before you’ve finished your story, which means I’m not really paying attention to your story. My mind wanders and I don’t have a full handle on how to rein it in just yet.

But I don’t get being tethered to your cell phone. Just because it “dings’ doesn’t mean you have to immediately check it. You’re not Pavlov’s dog. You won’t get a treat if you check it within 5 seconds.

I sort of get teenagers being obsessesd with their phones. They’re social creatures and their brains aren’t fully developed yet.

Live in the moment.

If you are at a concert, watch the concert. Don’t watch it through the 3-inch square screen you hold in front of your face (disrupting the view of the rest for us, I may add). You’re paying a lot of money to watch a teeny-tiny concert.

If you’re at work, do your work (this does not apply if your job involves using a cell phone – please don’t send me a message blathering on about how you need your phone for work – that’s not what this is about.)

If you’re having a conversation with someone, focus on that person.

Turn off the sound on your phone. Check it when you’re free from other distractions.

For that matter, you could…dare I say it? Turn it off.

I know, 21st century blasphemy. I can just hear the shrieking now: But I can’t turn it OFF! What if? What if?

Not to sound like I just rode in on the buggy with Laura Ingalls, but we all survived a childhood where we couldn’t contact our parents every second of the day and we LIVED.

As a matter of fact, the very, very rare times I called my father at work, it often went like this:

Me: “Dad, it’s me, Heather.” (I thought it was very important to identify myself, even though I was (and still am) his only daughter and the use of the term “dad” should have sufficed.)

Dad: “Why are you calling me at work?”

Me: “I cut myself and there’s blood everywhere!”

Dad: “Well, what can I do about it? I’m at work! Put a band-aid on it and wait until your mother gets home. And get your homework done.”

My children never call me at work. They enjoy the time we spend apart too much. They have texted me, though. I check these when school is over. These texts are usually earth-shattering notes that involve asking if we can have pizza for supper, instead of something ‘gross and healthy’ or to tell me that they forgot to get their science test signed and now they’re in trouble. In the words of my father: what do you expect me to do about that now?

To do what? Tell you that they’re having a sucky day?  Hello…we call that dinner conversation in my house.

What if #3: But what if someone funnier and more interesting than you is trying to get in touch with me?

Ahhh, now that’s the honest answer. Or at least it’s the one I think of when you constantly focus on your phone when I’m with you.

Put down the phones, people, and live the life that is going on around you (ie. Focus on Me!)

p.s. To my friends who are wondering, “OMG, is she talking about me?!” The answer is, of course not! I’m talking about that other person…you know, the one we talk about..behind her back? Duh, what kind of person do you I think I am? I love YOU.

School Improvement...A Step at a Time