The school dress code issue has reared its ugly head once again and everyone is acting like this is a brand-new problem.

Seriously? Every generation of adults since the beginning of time has felt that the younger generation dresses inappropriately.

Those kids are too sexual! Too sloppy! Just plain disrespectful!

We need to give our children some credit.

Saying that girls need to watch the way they dress because they could distract the boys is insulting to both boys and girls. And it’s sexist. Honestly, I spent most of my school years distracted by boys. And they weren’t scantily dressed boys. Just boys. Cute boys. Funny boys. Bad boys. It’s a wonder I graduated.

In the midst of the debate surrounding “appropriate” dress for students, we have forgotten one important factor – the students themselves.

Feeling like you belong somewhere is a basic human need. Children and teens spend most of their waking hours in school, so it makes sense that they would want to feel like they belonged to their peer group.

Quick. What’s an easy way to feel like you belong to a group?

You may not the smartest or the best athlete or the most talented musician, but when you are dressed like your peers, at least you belong to the group in one way.

Some of our dress code rules are so outdated that they were in place when I was in high school.

For example, take the finger-tip rule (please…take it.)

I did some research (ie. I went shopping at the mall) and discovered that it is damn near impossible to find shorts that meet the “fingertip rule”. Most of my shorts (and keep in mind that I am OLD) don’t meet the fingertip rule. 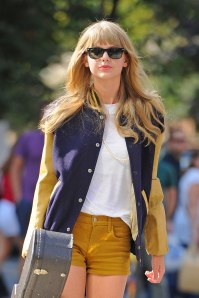 Yes, school is for learning all about math and reading and writing, but it’s also for learning how to maneuver social situations and for figuring out where you fit in the world. Middle-school kids tend to want to blend in with each other. If you have to wear shorts that are so long your mini-van driving mom wouldn’t wear them, then you are probably not going to feel good about yourself. Unless every other girl in the school is wearing the same dowdy looking shorts, you will probably feel like you are out of the loop.

Another part of the problem is that the rules are generally not enforced equally across the board. What ends up happening instead is that some girls are targeted and told that their outfits are inappropriate, while others sashay by without nary a word said. One day, I watched as a 12-year-old girl had her skirt inspected by a teacher and the principal, in the middle of the hall during the lunch hour.

While she stood there, mortified, a half-dozen girls walked by in similar outfits and none of them were called to task for breaking the dress code. This girl just happened to have a teacher who felt that since the rule was in place, it was her job to enforce it. The girl being called out for her short skirt was also pretty. (And we all know pretty girls distract the boys…so, stop it…stop being so pretty, pretty girls.) I don’t blame her teacher. She was damned if she did and damned if she didn’t. (And don’t even get me started on the male teachers. If they say something, they can be accused of leering at the young girls and if they don’t, they are accused of ignoring the “problem”.)

Girls who develop more quickly than their peers often get dinged with the dress code, too. They may be wearing the same the shirt and skirt set as their peers and yet because they look like curvy young women, they are told their outfit is inappropriate.

In this case, the rules need to be changed.

We are trying to implement 80’s rules in the 21st century and our 21st century kids want nothing of it. They know fashion trends before they hit the newstand and they want to try them out.

Parents can decide if their child’s outfit is appropriate. And yes, some kids will rebel and change their clothes without their parents knowing. That’s part of growing up.  (True story: At my high school, there was a group of Pentecostal girls who would come to school every day in their long jean skirts and their buttoned-up blouses and immediately go into the bathroom and change into skin-tight jeans and t-shirts. Teens will rebel and the sun will set in the west.)

I don’t know what the answer is, but I do know a few things for sure:

1. As the mother of two teenage boys, I have never had one of them say, “Geez Mom, I could have made an A in math if it wasn’t for that girl in my class wearing those short shorts.” Both have managed to learn and succeed in school, despite the occasional distraction of a girl in short shorts.

2. As a teacher, I have never said to a parent, “Well, Billy would have passed if it wasn’t for that Jessica and that visible bra strap of hers. There goes his chance of getting into law school.”

3. Making girls feel ashamed of their bodies and telling them that they are “distractions” is wrong.  Let’s stop doing that, shall we?